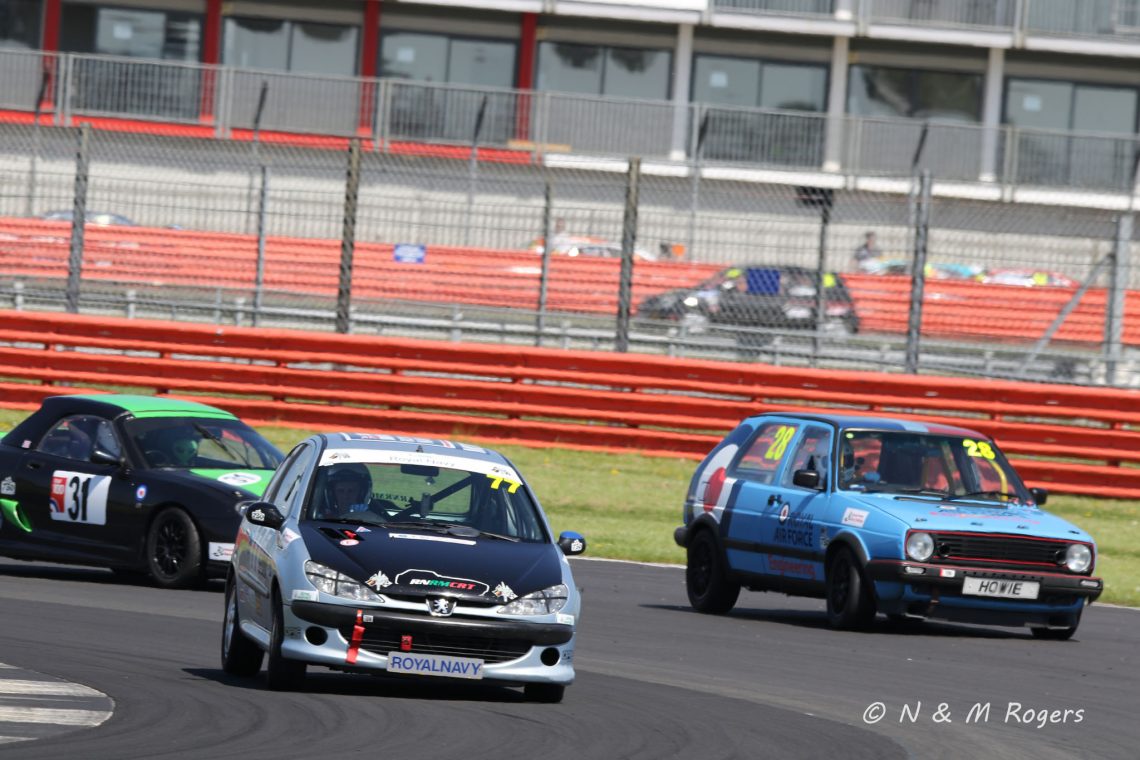 A glorious sunny Silverstone welcomed the Royal Navy and Royal Marines Car Racing Team to Round 2 of the Armed Force Race Challenge.  PO Jimmy Cantwell, Mne Adam Dewis, CPO Gareth “Stirling” Moss and Lt Cdr Keith Attwood ventured to the home of British motorsport hoping to improve on reliability issues that had scuppered a strong team performance during the first round.

Qualifying saw no major issues for the team and out of the 30 starters, the Class B Vauxhall Astras of Adam and Stirling were the highest RN/RM cars on the grid in 11th and 14th places, Keith’s Class C Mini Cooper was in 17th with Jimmy in the RN owned Peugeot 206 in 26th spot.

The start of the race is always critical and off the line Keith continued his fast starting trend making up 5 places, overtaking the faster cars of Adam and Stirling in the process, both of whom slipped down the field slightly in the opening lap.  Jimmy also got away well taking 2 paces in the initial corners.  Adam and Stirling soon started to recover though and the greater power of their cars allowed them to claw back the places lost and they started making progress through the field.  Sadly though the curse of reliability struck Adam and Stirling again.  Adam retired from the race with a drive shaft issue and Stirling lost all coolant, overheating his engine.  This left only Keith and Jimmy on track for the team.  The chequered flag fell with Keith in 15th place (7th in Class C) and Jimmy in 20th (12th in Class C).

Getting stuck into some battle damage repair was a necessity for the team as they worked hard to try and get Stirling and Adam back out for race 2.  Adam successfully replaced his drive shaft, but still had an underlying concern that there was something more untoward with his gearbox, however the diagnosis on Stirling’s car was less optimistic.  Coolant was getting into one of the cylinders, pointing towards head gasket failure, this would see a premature end of the day for Stirling.

With the team depleted to 3 cars for the second race and with the certainty of team points penalties for Stirling’s non start we were competing for damage limitation.  Another set of solid starts from Keith and Jimmy gained them places in the opening laps and they battled hard to continue to capitalise on this.  Adam would only survive for 5 laps before a terminal driveshaft issue forced him to retire again, this is pointing more towards a diff/gearbox issue for the continual problems.  It wasn’t just the RN that were suffering, the heat was having impact throughout the field with 7 retiring as the race progressed.  Come the end Jimmy had progressed to 19th (11th in Class) and Keith up to 13th place (5th in Class).

For AFRC Championship points (awarded for lap consistency) Jimmy would leave the round with 17 and Keith 16.  Both saw them climb the AFRC Championship ladder, with Keith now in 7th place and Jimmy in 9th.  The team points took a battering with the RNRM Team remaining in last place.  The novice championship is going well for the RN with Jimmy currently in 1st place.

The next round is on 9 June at Rockingham Motor Speedway.

Anyone wishing to get involved, either racing or supporting, should contact Lt Cdr Keith Attwood at rnrmcrt@rnrmmsa.co.uk.  There are opportunities to race in the RNRMMSA owned Peugeot 206 and most safety equipment can be provided.