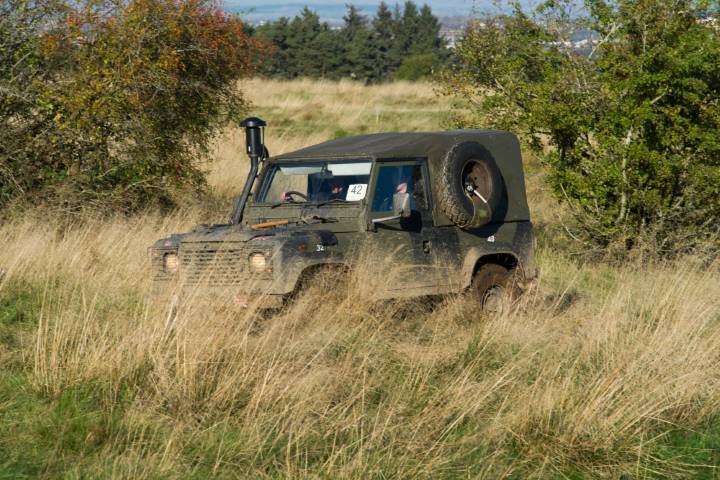 Last race of the season is always a good one for the ORT and a trip to Glasgow is where it takes us. We are up against the elements at this event with leaving the sun behind us in the south west we come up against the snow, frost and heavy rain, just what you need to put the trucks to the limits and get the mud flying. Mudmaster is a multi-venue event, with the competition taking place on private land, linked by road sections. The aim is to get round the entire route without picking up penalties for driving or navigation errors, and it’s the lowest score wins. This is organised by BAMA with GEMM 4×4.

The team we took up was Land Rover 38 Driver :- CPOET Squid Cozens and Navigator AB Nick Fleming in their Defender Tray back 110. Land Rover 39 was Driver :- CPO Fred Basset and Navigator :- PO Pat Beckett in their Green fleet Defender 110. One team had to drop out due to the ship deploying. At the time of this the leader board was close between both teams and this meant it was all to play for at this event but the main target was to beat the army yet again like 2017 on their home truth and show them that the RNRM and good on the ground as well as at sea.

So we arrived at 154 (Scottish) Regiment RLC on Friday 26th after a long drive from BRNC and RNAS leaving the south west in the morning to arrive in good time to set up camp for the weekend and ready to sign on, taking us 8 hours to arrive at 154 there was already a fair few trucks parked up ready for the weekend.

After we arrived it was time to unload the race truck and find out how the other team had got on, on approached to the LR we noticed that both Pat and Fred had head phones in, this was due to the noise of the off road tyres groaning on the road all the way up and causing both nav and Driver to have headaches, when we looked closer we realised that one of the treads has nearly stripped it self on the inside wall so already one team was down to just 4 tyres, not good when we seam to go through them often. So after this was sorted time to sign on and let the Army know we had arrived.

When we sign on we are then given our maps and instructions for the weekend, have to join the que to be scrutineered to make sure all trucks are ready and fit to go on road and off road. This takes a bout 30 mins to be carried out, a bit like a MOT. After this we can then start plotting some routs for the weekend on out OS maps, you need to find a nice quite area for this so we can talk as a team (driver & Nav) to plan our route and look at the tasks ahead, you don’t really want any one else to listen in as it’s all about tactics and how to get from A to B in good time. Once every one had arrived for that night it was time for bed. 2230 by the time we finished is a long time after all that driving from the south west too.

On the Saturday we woke at 0600 bright and breezy ready for the day having breakfast laid on for us and bag meals ready we were off back to 154 to go to the trucks After clearing the Ice from the truck, (inside too) we are ready to go. We were truck 38 so we started 38 mins after truck 1, good place to be as you have time to double check a few things from the night before with our co Team members right behind us on Truck 39. Both of us are in different groups, 38 is in Expert class and 39 in Green fleet. But we also have over all RN so a little bit of inter team comp too. All the time we are driving from Grid Ref to Grid Ref we have to look out for letters so both Nav and Driver are on the go. Bringing the day to a end was the night race. After a day of driving this is hard work but you know bed is around the corner after this. Saturday was a great day with both trucks doing well with very minor points so all to play for and we were being chased down by one of the Army, he seamed to like having his foot to the floor so it was time on Sunday to unleash the beast of the tray back.

On Sunday getting up and ready to go and knowing what we had to do we arrived at 154 to pick up the truck and we had 2 flat tyres, not a good way to start the day and the air was very blue, so good to see the RAF where on hand to help us out and get us back on the road. Running late now we had to catch up and told Fred in truck 39 to go on ahead. After a few very fast laps on the next 2 off road courses we were back up to speed with the rest of the comp, nearly putting the truck on its side was so worth it to get our position back and Truck 39 holding fast for the RN up ahead. We realised that half way through the door that the army had points for speeding and they were happy to tell us this so we knew we had a bit of space now but just in case there was a bit of inter service banter we did not let off and good job as they went clear on a few other courses and closed the gap but the tray back was running good and nothing was stopping team 38 with team 39 close behind.

Coming back in to 154 meant we could then stop for the weekend, have a clean up while we wait for the results to be counted and the trucks to arrive back. 62 trucks took part this year and that was from brand new Suzuki Vitara to land rover to RV’s. so the result were in and everyone rushed to the board to see the results. Truck 38 come in 6th overall, 1st military and 1st  RN. Next was Truck 39 come 11th overall, 3rd military and 2nd RN. A great weekend and even better bringing home the silver wear.  This event could not have been organised with out the help of 154 (Scottish) Regiment RLC and GEMM 4×4.

This meant after a great season that Inter-services was won by the Royal Navy Royal Marines this year.