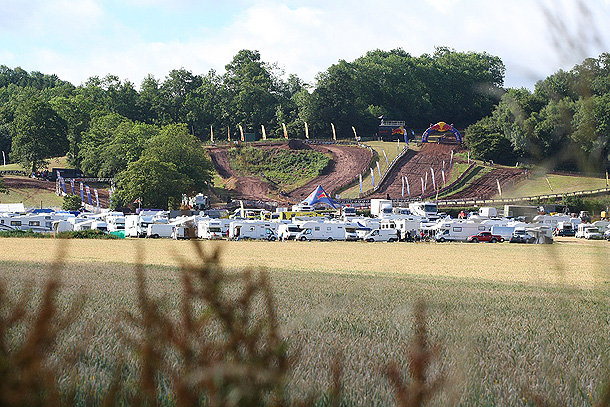 The final event of the year for the Royal Navy Royal Marines Motocross Team would come in the form of the Acerbis Amateur Nationals final round at Pontrilas.

The competitors for the weekend would be Adam Figgins and Nick Carbury. The former having missed most of the year through various injuries and so was chasing points, the latter having competed throughout most of the year and was the leading Royal Navy riders.

As the riders arrived on Saturday morning, it was clear to see the track had not had a great deal of TLC leading up to the weekend. Dry and untended, this would pose its own share of challenges as it would be difficult for lines to develop, even more important as a lot of the track is off camber.

The first race would begin with both riders getting top 20 starts, however Figgins would drop to 22nd early on and had to battle back to 20th in the closing stages, directly behind his teammate. Carbury would attempt a double pass on the two riders in front early on the last lap, however the attempt would see him run wide in a corner and lose two positions. Figgins and Carbury finishing 21st and 22nd respectively.

A very similar start in race two would once again see both riders inside the top 20. Figgins would make the pass on his teammate early on the first lap, and would press to make another pass. The gap remained consistent for much of the race between the two, with a rider in between them. On the final lap Figgins would succumb to a punctured rear tyre and would need to ease his pace right down to finish, allowing Carbury through with a finish in 17th. Figgins would finish in 31st.

The dry conditions proved too dangerous by this point in the day, with the bikes kicking up plumes of dust. So the riders were subjected to a delay in racing while the track crew watered the track.

Figgins, clearly annoyed by the bad luck in the previous race, nearly pulled off a holeshot in the third and final race of Saturday. Unfortunately another rider would sweep across his line from the outside in the first corner costing him time. He would remain inside the top 5 in the first lap, gradually dropping back throughout the race to finish in 8th. Carbury would once again get a top 20 start, however would try to force a pass on the first lap and would wash out on the now slick track leaving him near the back of the field. A charge would see him push back to 25th by the end of the race.

With the points fairly close from the day, Figgins had closed the gap in the Inter-Service Championship meaning Carbury would need to score some of the best races of his year on Sunday to hold his teammate off for 2nd. Carbury had done enough to secure the Royal Navy and the Royal Marines Championships.

Sunday would see a complete change to the track as it had been ripped and watered the previous evening- almost like riding a completely different track! So the day began with the final two races of the year for the Navy riders.

Carbury would get his best start of the weekend in the first race of the day, rounding the first corner in the top 5. On the contrary, Figgins would have his worst after the bike swapped from one side to the other along the start straight leading to a crash. As Carbury gradually dropped back through the field, unable to match the pace of the front runners, Figgins would mount a charge from the back of the field. Both riders meeting on the final lap, with Carbury managing to hold his teammate at bay for 14th by a few tenths of a second, Figgins finishing in 15th.

Good starts would close out the year as both riders would start well inside the top 20. Misfortune for Carbury near the end of the first lap, as he would blow out a dusty berm and slide off the side of the track, allowing much of the field and his teammate past. Carbury would get going again in the mid 20’s pushing back to 20th before a tip off early in the last lap would allow two riders past, meaning a 22nd finish. Figgins would push through the field to finish in 13th.

With good finishes on the Sunday, Figgins would pass Carbury in the Inter-Service Championship and secure 2nd place by a mere 21 point gap. The efforts by both riders would be enough to secure the Inter-Service victory for the Royal Navy.