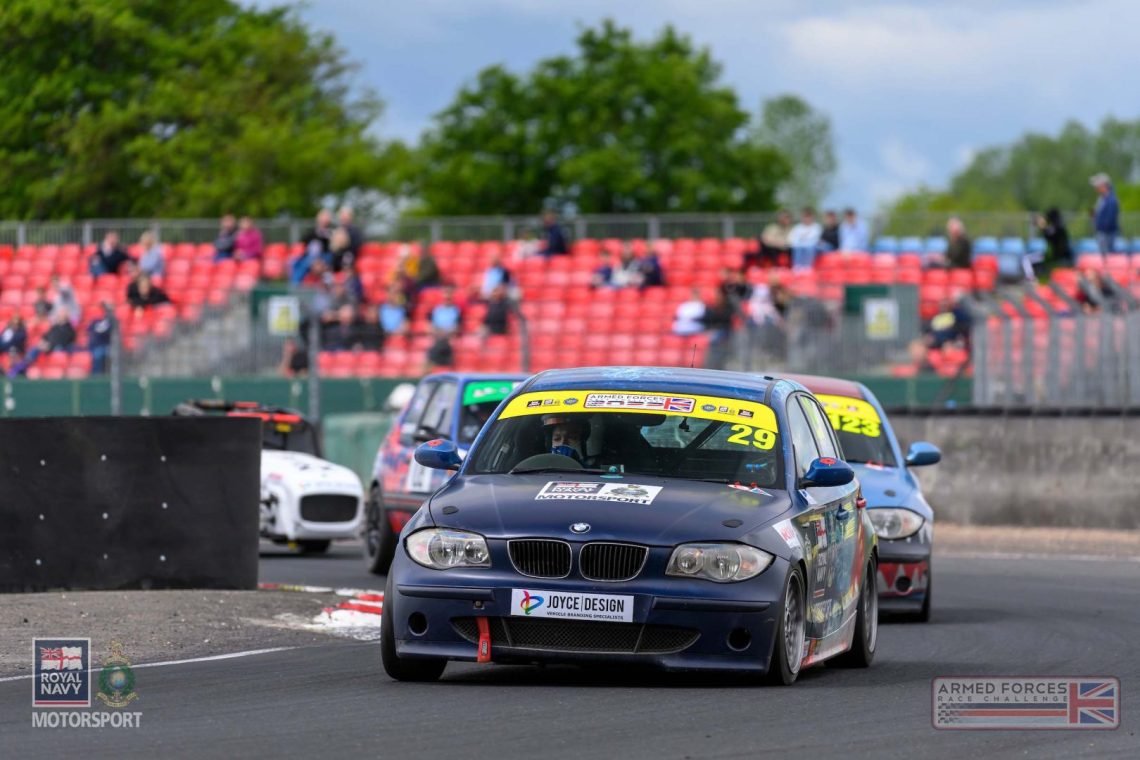 Rounds 3 and 4 of the Armed Forces Race Challenge saw the RN RM Car Racing Team head to Croft circuit in North Yorkshire in a 29 car grid.

Croft is one of the more challenging tracks in the UK with fast straights into tight technical corners with very little run. These sections require commitment from the drivers to get the absolute best out of their cars while also trying to stay within the track limits or risk taking an excursion into the neighbouring farmer’s field. All drivers set some very reasonable track times for qualification with Veteran Mark Inman (Caterham Sigmax) and Mne Adam Dewis (Vauxhall Astra) managing to qualify 1st and 3rd in class respectively for both of this weekends races with Mark qualifying on pole for the entire grid. This happened to be the first time ever at Croft for many of our drivers and saw great improvement across the 3 sessions. One of our Novice drivers, LH Daniel Blackett, using the team owned BMW 116i took advantage of the test day on the Friday and saw dramatic reduction in his times as he started to gain more confidence.

Race 1 got underway and unusually for Croft there were no incidents, which with the nature of the first section at the end of a very fast straight is a testament to the ability of the drivers out on track. All cars were performing reliably and everyone settled into the rhythm of the race. Adam found himself in a great scrap witj RAF drivers Alex Smith (Honda Integra Type R) but found himself slightly run off track compromising his lap. Dan (in Class D) was doing well against the other identical BMW 116 from the RAF but lost out when the faster cars came through tot lap the field, unfortunately a conceding place to the RAFs James King. CPO Gareth Moss (Mazda MX5) who was running 2nd was having a solid drive and was running 2nd in Class D, however overcooking it into turn 1 on the final lap saw him in the gravel trap and not seeing the chequered flag.

Despite these incidents overall the team had a brilliant result for race 1, with Mark placing 1st in Class B and taking the overall win. Lt Cdr Keith Attwood (Mini R53 Cooper S) who qualified 14th overall and 7th in class managed to finish 8th overall and 2nd in Class C. And with Keith’s brilliant race and consistent lap times he managed to place 3rd overall with the Performance Index (PI) points system. Dan also secured his first every podium, with a 3rd in Class D. This allows all racers across all the different power classes to compete together by rewarding consistency in there driving but still encouraging wheel to wheel racing.

Back in the pits, Adam was left checking over his car after noticing an oil leak weeping from somewhere on his charger which was not a big concern for the next race, however his gearbox started to develop a weird sound and wasn’t able to select 3rd gear, with this he decided to retire from race 2 to prevent any further damage. Gareth was also left sorting his car out, noticing that the exhaust had split where it had been caught in the gravel, so with some engineering ingenuity a temporary repair was manufactured using some soft drink cans and clamps to make sure he was in a fit state to start the next race once he had removed most of the stones that found their way into various spots in his car’s chassis.

Race 2 quickly came around and Gareth made it back to the grid and he managed to claim back his 2nd place in Class D he narrowly missed out on in race 1. Mark put another cracking set of laps together with a copy of race 1 while also managing to get 1st for the PI element of the race. Keith managed to claim another podium with a 3rd place finish in Class C and finishing 7th overall, but also manage a 2nd place in the PI. Dan scored another 3rd place Class D finish, but this time beating the RAF BMW 116. Mne Ben McLaughlin (Renault Clio 172) had a solid race and was very close to gaining another position in the final laps of the race, however coming up on lapped traffic his speed was compromised as he took a different approach into Tower Bend. He managed to pick up 6 points over the weekend for the Novice championship putting him in 1st position with a 5 point lead.

Overall a solid performance from the team, with a total of 7 podiums across the classes and PI results, this currently puts the team in 1st place for the inter service rivalry with another 6 rounds of racing to go with the next rounds being held at Brands Hatch Indy on 02 Jul with what is set to have 10 team drivers competing. Hopefully all the cars will be back on track and we can extend our lead over the other service teams as we reach the halfway point in the calendar.