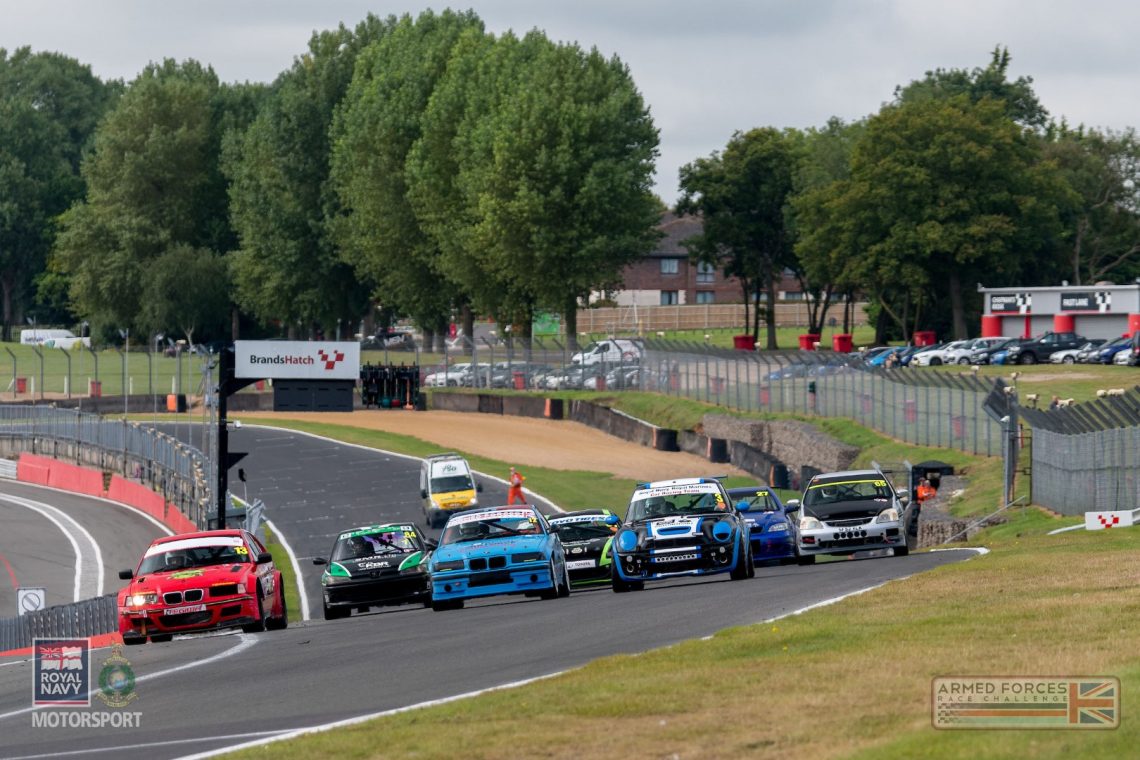 In the space of 3 weeks the RNRMMSA Car Racing Team has been out competing at both Anglesey Race Circuit at the end of August and Brands Hatch at the beginning of September in the Armed Forces Race Challenge (AFRC). Elements of team would look to capitalise on their strong showing at the previous round at Snetterton, whereas others would hope that they had eradicated some reliability issues.

Thankfully the Anglesey round proved that for the majority of the team the prep work they had put in paid off, with only CPO Steve Hutchings’ highly modified Peugeot 106 again suffering from problems resulting in him not finishing either race.

Lt Cdr Mike Wells (847NAS) was the standout driver for the team, securing a double Class victory in his Toyota MR2 Roadster, seeing off a lot more powerful machinery in the process. The team also welcomed new driver LCpl Ben McLaughlin (RM Poole) in his Renault Clio 172 who completed his first 2 races without issue and demonstrating some great consistency in his lap times.

As well as the AFRC races the team also competed in the 90 minute BMW 116 Trophy race. This is a single make series, where all the cars are identical. It requires a minimum of 2 pit stops and allows for driver changes. The RNRMMSA owed car was driven in this event by Lt Cdrs’ Keith Attwood and Mike Wells (both from 847NAS) and Mne Adam Dewis (RM Poole). The Team started in 13th place out of 18 cars and fought well through out the race to get into 4 place as the race progressed, but post the second round of pit stops the team lost 1 place and also then incurred a 5 second penalty for track limit violations pushing down to 6th position when the chequered flag fell. Overall though a great performance that needed a full team of support crew to conduct the pit stops and manage the team tactics as the race progressed.

3 weeks after Anglesey we were off to Brands Hatch in Kent for the both the next rounds of the AFRC and the BMW 116 Trophy. LAET Seb Unwin was returning to the grid after his incident at Snetterton earlier in the year and LCpl Ben McLaughlin would be using the BMW 116 in the AFRC races as his Clio 172’s fire extinguisher was unserviceable. For the 116 Trophy race the same drivers of Mike, Keith and Adam would be contesting the round.

In the AFRC race 1 the team had a great result. Keith in his Class C Mini R53 got a great start moving from 6th into a briefly 1st place, before slotting into 2nd ahead of much more powerful cars. After a number of laps valiantly trying to defend the place he lost a number places to the Class A and B cars, and finished 8th, with Seb 2 places behind in 10th. Adam in his Class B Astra Mk4 had a poor getaway but recovered to finish 5th and 2nd in Class B. In Class D Mike Wells once again drove a superb race taking the Class win, 40 seconds ahead of next in Class! Gareth Moss, Ben McLaughlin and Sean Graham all had strong personnel performances as well in a race where all RNRM drivers finished (this doesn’t happen all that often)!

Mike again mirrored his performance in Race 2 taking the Class D win. Seb battled exception well to secure 2nd in Class C, with Adam taking 2nd in Class D. Sean had his best result of the season in his Lo-Cost. After having another exceptional start Keith unfortunately did not finish the race owing to broken bonnet pins causing the bonnet to fly open.

For the team drive in the BMW 116 Trophy race we weren’t able to replicate the high finishing drive that we saw at Anglesey with 15th out of 25 the final result. We were a victim of timing and had just taken an early pit stop to jump a number of cars when a safety car was called out allowing the vast majority of the field to pit whilst the race was neutralised, effectively gifting 1 lap to these cars. That being said as a team the support crew did a great job, ensuring that driver changes and setup tweeks were conducted safely and efficiently during the race.