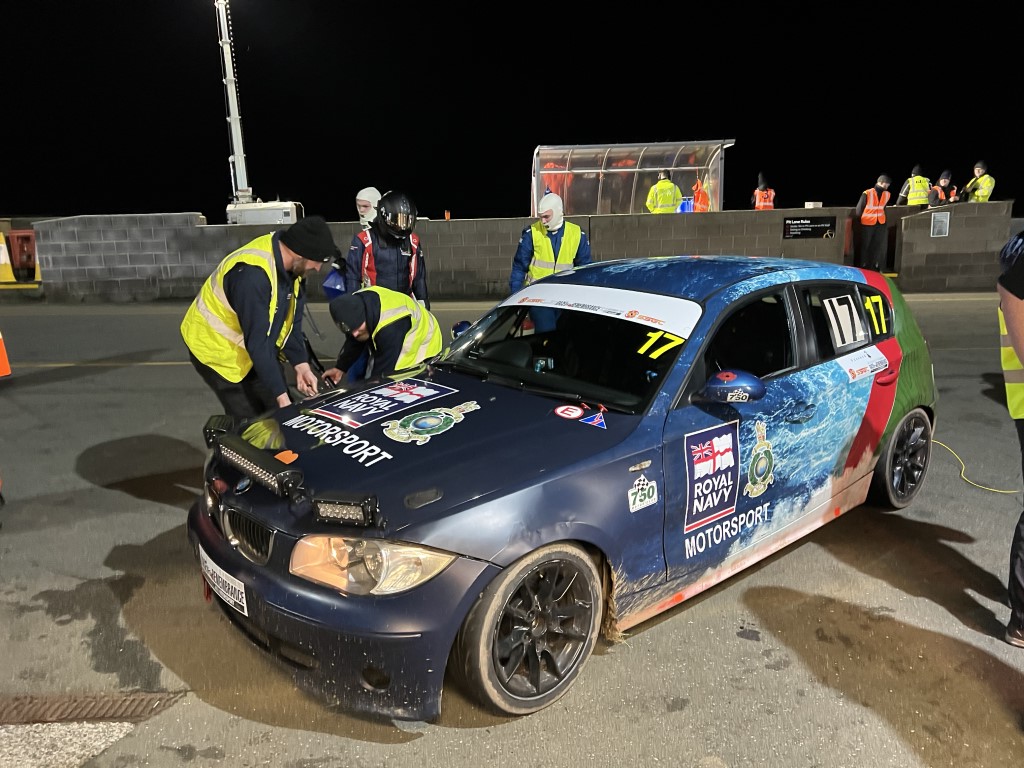 The culmination of the Royal Navy Royal Marines Car Racing Team’s season was seen at the end of October and beginning of November 21. The Inter Service Car Racing Championship, held within the Armed Forces Race Challenge series, has seen 35 service drivers compete across 8 races on 4 different circuits through-out the year. The Car Racing Team as a whole started well and had a number of strong results in the early rounds. The curse of unreliability sadly started kicking in towards the end of the season impacting the team standings. However, there were some strong individual performances during the year particularly by LAET Seb Unwin (JARTS), Lt Cdr Mike Wells (847NAS), CPO Gareth Moss (RM Poole) and Lt Cdr Keith Attwood (815NAS).  The final round was held at Mallory Park circuit in October and going into this Keith held a 9 point lead over the next placed service drivers. A chaotic couple of races ensued with multiple issues throughout making it exceptionally challenging for the lead championship contenders, with them all doing well to steer clear of trouble and finish unscathed. Keith secured an impressive points win in both races, taking home the maximum 40 on offer, seeing off any competition that the Army and RAF offered. The final tally saw him finish on 97 points against the 79 of Doug Inglis from the Army Sports Car Racing Team, and in so winning the Inter Service Car Racing Championship, which is the Naval Service’s first ever win of this fiercely contested Championship.

The final race of the season was the 12hr Race of Remembrance held at Anglesey over Remembrance weekend. Participation was only possible owning to the exceptional assistance of the Royal Navy Royal Marines Charity and the RN Sport Lottery who provided a financial grant towards the very high race fees. The race itself is a 12hr endurance race contested over 2 days – 6hrs on the Saturday and 6 hrs on the Sunday, with the Saturday racing predominantly at night. The race is halted on the Sunday to enable a service of Remembrance to be conducted in the pit lane. This is truly unique in motorsport and with a number of veterans and wounded service personnel participating through the Mission Motorsport Charity, it is a fitting way for the motorsport community to pay tribute to those who have lost their lives whilst also reflecting on those who remain with us that continue to be affected.

LCpl Adam Dewis (RM Poole) put in a huge amount of work into the RN owned BMW 116 to ensure the car was fully prepared and hopefully reliable for the harsh operating environment that a 12hr race would place on any car. With this complete the team of 13 personal from across all ranks and rates of the RN and RM headed up to Anglesey for the 3 day event. The team consisting of 5 drivers and 8 pit/support crew would contest the race against 53 other teams including 2 cars from the RAF and 1 from the REME. There would be 7 BMW 116’s completing in our class, with all cars built to the exact same spec. As such preparation, reliability and consistency was the key to not only last the race but also hopefully take both the Inter Service and a class win. Adam’s prep really paid off with a good outing by our drivers in both the day and night qualification sessions, seeing the RN car start 4th in Class, but more importantly ahead of RAF and REME cars.

The first 6hrs of the race would start at 1500 finishing at 2100 on the Saturday, with LAET Seb Unwin (JARTS) the first driver out for the team. A great first couple of laps saw the RN climb to 2nd in Class and owing to an on track incident bringing the safety car out enabled us to gain over a lap on the RAF and REME cars. This run of form continued into the night with our pit lane crew of LAET Dan Blackett and AET Keilan Shortt (both 815NAS) working well with the refuelling and tyre checks during driver change overs. Adam took the stint after Seb followed by Lt Cdr Mike Wells (847NAS) and then Lt Cdr Keith Attwood (815NAS) to round off the day. When the race halted overnight the RN car had narrowly dropped back to 3rd in Class owing to pit stops, but remained 3 laps ahead of the lead RAF car and some 10 laps ahead of the REME car. Furthermore, the car was in good condition with no lasting battle scars from the first 6hrs of racing.

Into the Sunday at 0900 the race resumed with Keith in the seat. A number of incidents from other vehicles in a short space of time resulted in multiple safety car deployments. The timing of these was unlucky and saw the team lose a position and RAF claw back to the same lap as the RN. However, with over 5hrs of racing left there was still all to play for.  The race then again stopped, but this time for the planned service of Remembrance. All teams, marshals and spectators then gathered in the pit lane, with the Padre from RAF Valley presiding over the act of remembrance. With wreaths laid and silence held the entire motorsport community at the event paid their respects to the fallen. Silence was replaced by applause for our veterans and the wounded at the event and with that turn the teams and drivers reconvened back on the grid and the race recommenced.

CPO Gareth Moss (RM Poole) resumed the charge for the team, followed by Mike and then Adam for the final stint. The car held together and the performances from our drivers were stellar. We regained second position in Class and drew out a commanding lead over the RAF, with the REME retiring their car due to mechanical issues. With the chequered flag falling at 1530 we delivered an exceptional 2nd in Class finish, but more importantly secured the Inter Service win of this event, finishing 7 laps ahead of the nearest RAF car. An extraordinary achievement for all involved.

A huge thank you the RNRMC in being a primary facilitator in enabling RNRM service personnel to compete at this event.