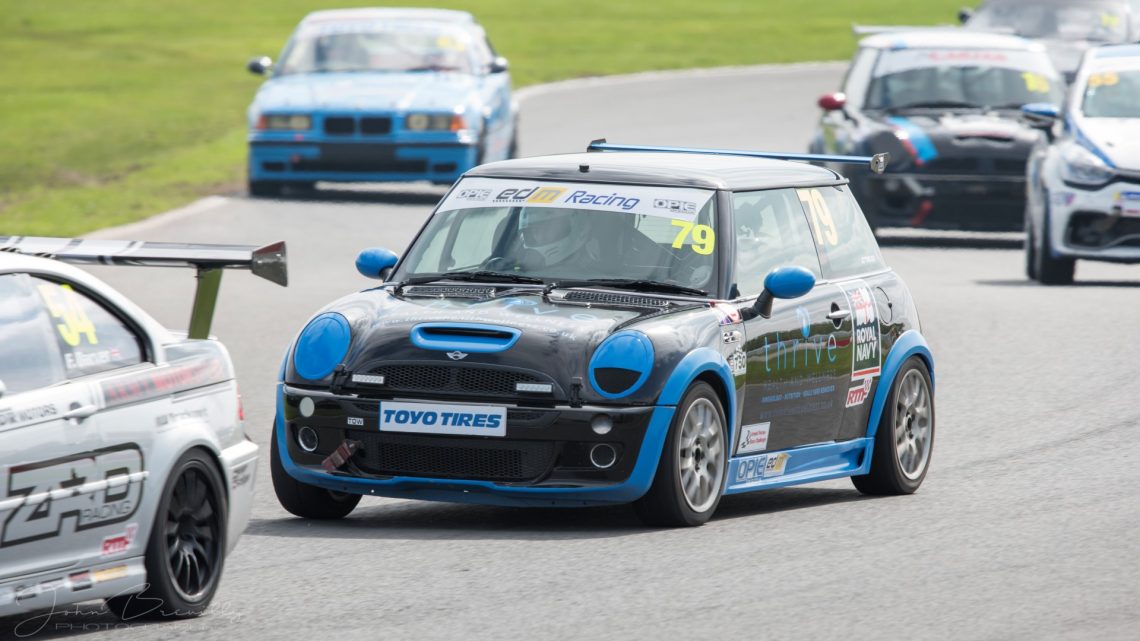 The Armed Forces Race Challenge returned for a new season on 14 Apr to a sunny Oulton Park in Cheshire. The RN RM team had worked hard over the winter to try and eradicate any early season reliability issues that blighted them at the start of the previous season. Returning this season was RN Champion Lt Cdr Keith Attwood (NCHQ) in his Mini Cooper; sharing the driving in the RN Peugeot 206 were Cdr Rich Scott (PJHQ) and PO Jimmy Cantwell (814NAS) with CPO Gareth ‘Stirling’ Moss (PORFLOT) and Mne Adam Dewis (RM Poole) both in Vauxhall Astras. Former RNRM team member, now veteran, Mark Inman was also back in action with his VX220.

Qualifying saw mixed fortunes for the team with Adam and Stirling, in the more powerful Class B cars, both having minor issues which meant they started further back than expected in 21st and 15th positions respectively. Veteran Mark (we’ll still claim him!) in our other Class B car qualified high up in 4th. In the lower powered Class C cars Keith had a storming session finding himself in 13th place (and 2nd in Class) ahead of much more powerful vehicles, with Jimmy starting 23rd out of a total of 30 starters.

Oulton is a fast and demanding circuit with scant room for error owing to the close barriers and little run off. With such a large grid the starts can be treacherous with the cars packed more closely together than what you see in F1 or Touring Cars. As the lights went out for Race 1, Keith hooked up the start perfectly passing 6 cars by the end of the first corner elevating him up to 7th position. However, the power differential between the Mini Cooper and some of the faster cars he had cleared was quickly apparent and over the next 3 laps he was re-passed by 6 cars, putting him back down in the same position he started the race. Adam stalled off the line and was lucky not to be collected by the cars astern of him as the quickly came though. Stirling and Jimmy both got away safely and settled into the race well offering solid performances. Mark had a great tussle at the front of the pack and came across the line in 2nd place (and 1st in Class B). Keith crossed the line in 13th (2nd in Class C) with Stirling 17th, Adam recovering to 19th and Jimmy in 21st.

In Race 2 Jimmy handed over to Rich to take the wheel of the 206, but having conducted practice/qually out of group he had to start from last, Mark started in 3rd, Keith 12th, Adam 16th and Stirling 20th. With another commanding drive Mark saw off stiff competition from the Army to finish a mirror image of Race 1. Adam’s bad luck continued as he was a victim of another competitor running into the back of him in lap 2, forcing his retirement. Stirling suffered gearbox issues but managed to nurse his car home in 15th place. Keith had a poor start in comparison to Race 1 losing 3 places by the end of the first lap. However, some good overtakes and an absolutely bizarre last lap which saw him spin but still manage to overtake the car in front on the back straight when they lost power, enabled Keith to take back 13th place and ultimately finish 3rd in Class C. Driver of Race 2 for the RNRM had to be Rich, starting from the back of the grid he had made up 6 places on the first lap and continued to storm through the field throughout the race to finish 18th overall.

In the overall Championship, Rich’s sublime drive in Race 2 combined with Jimmy’s solid work in Race 1 saw them take home 3rd place (Championship based on combined points calculated for consistency of lap times). Keith’s great first race also provided some strong points for the RNRM which helped to counter Adam’s bad luck although this still impacted the team’s standings as after the first 2 races the RNRM Team sit at the foot of the table. However, with less than 2 points separate all teams and with 3 more rounds to go this is nothing to worry about yet! In the Class Awards, Mark took home Class B honours, with Keith taking 2nd place in Class C.