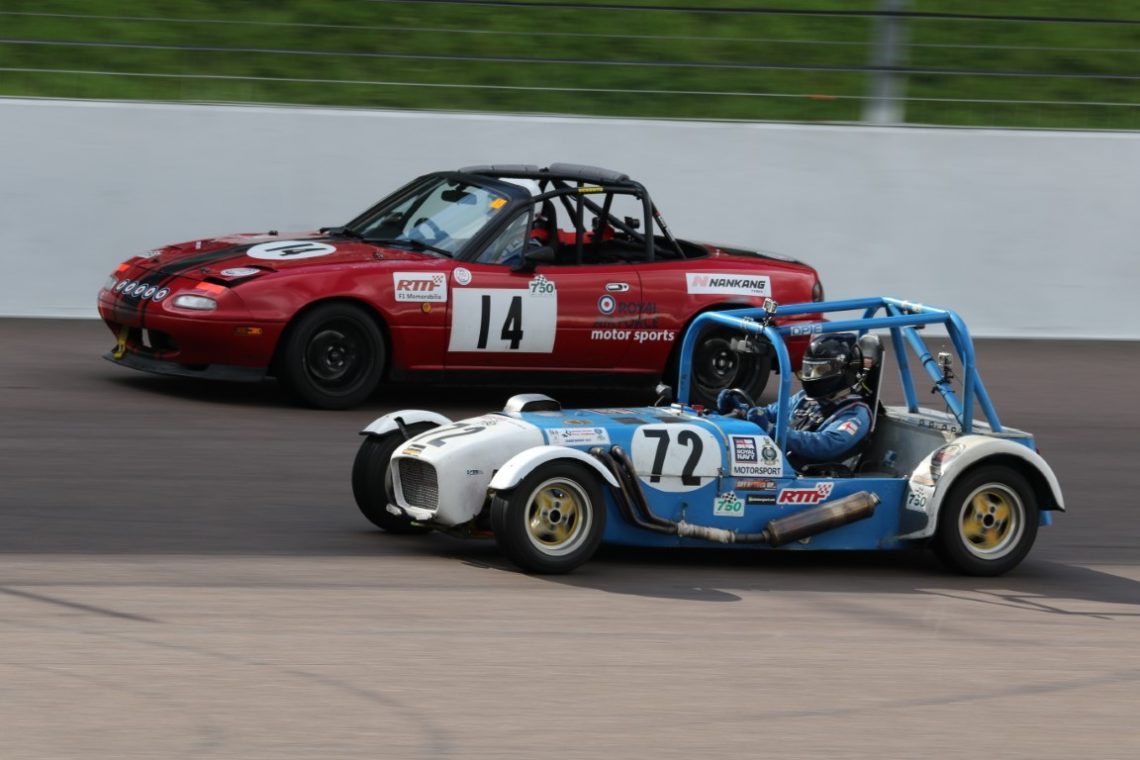 All at sea at Rockingham – RN Win final round.

Round 4 of the Armed Forces Race Challenge saw the RNRM Car Race Team head to Rockingham Motor Speedway on 9th September. Armed with our support crew we turned too at the famous Speed track in Corby, Northamptonshire where we were faced with fast changing and very localised weather conditions. After sailing through scrutineering and qualifying we were set in grid position: Cpl Mark Inman (3Cdo Bde) in 17th in his VX220. Cdr Richard Scott (PJHQ) / PO James Cantwell (829 NAS) in the RN Peugeot 206 in 23rd was just ahead of Lt Cdr Keith Attwood (NCHQ) in his Mini R53 in 25th with PO Sean Graham (HMS Dragon) in the Sultan Locost starting 30th.

Grip is notoriously poor in the wet on the Rockingham Speedway banking and with rain drops on the windscreen as the cars lined up on the grid; nerves were jangling. The pack generally got away cleanly, stand fast the front row who hesitated for a split second. Scott & Attwood made up a number of places into turn 2, coming off the banking, managing to avoid others who locked up or span. Mark Inman made up 5 places in the first lap and the rain stayed away with Scott & Attwood having a proper bonnet to bumper race, swapping places and within a few 10ths on a 1:55 lap. Inman was continuing to make progress up the field, with some of the faster cars having failures, spinning and Mark just driving the wheels of his very well prepared Vauxhall. Just as Scott came into the pits Attwood miss judged the final corner, bouncing across the grass but avoiding the wall. Scott handed over the Silver 206 to Cantwell and he settled into his first time driving at Rockingham. Cantwell held his nerve and kept improving his lap times to bring it home in one piece. Sean Graham had issues with a clutch not playing ball and by the finish was forced to be running with only 4th gear.

Just after the race the heavens opened, with proper monsoon style rain. Some of the drivers had entered a second handicap race and were juggling with whether the track would dry in time. Unfortunately, Attwood had a suspension failure and Cantwell lost his auxiliary belt, resulting in both having to retire before the race began. It left only Mark Inman & Sean Graham to represent the RNRM! Sean had wets and was praying for rain; however it remained dry – but wet under foot and slippery. Sean pushed the locost on to finish 13th out of 24, with Mark Inman running in 2nd for most of the race however he had a couple of big slides in the final lap, just losing out to a podium finish by dropping to 5th while 4 abreast with the Army over the line.