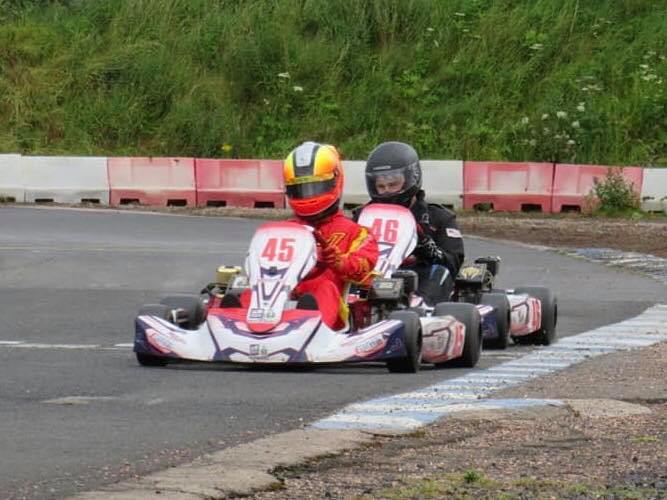 Round 4 of the 2019 Inter-Service Karting Championships was held at Crail Kart Track in Scotland, on the site of the former RNAS Crail.

The team were able to field four karts for this round with nine drivers in total. Thanks to a full day of testing on the Friday, most of the drivers were ready for the race on Saturday.

Saturday’s conditions were good until a heavy burst of rain soaked the track an hour before qualifying. The team elected to qualify and start the race on dry tyres, hoping to make up the time against those starting on wets when they pitted for a tyre change.

Qualifying did not produce any standout performances, with the front rows dominated by those on the wet tyres. 47 and 45 qualified in the mid pack while 46 and 48 were further back.

The race started and Laister in 45 made a great start jumping from 11th to 4th within the first two corners and 47 with Cresswell wasn’t too far behind.

As the track dried over the first hour the karts began to perform at their best and by the midpoint 45 had managed to take the lead with 47 on a separate strategy in a very good position at the front too.

After two hours Kart 45 came into the pits for the final driver change with a massive twenty second lead. Theodorou took over from Laister who had just set the fastest lap of the race. Unfortunately disaster then struck, the wire coming out of the kill switch had frayed meaning the Team were unable to switch off the left engine and the Scrutineers ruled that the kart could not return to the track until it was changed. By the time this was changed the team got back on track in the middle of the pack and several laps behind the now leader, Kart 47.

Kart 47 were pitting late as part of their strategy however as they came into the pits the kart suffered with the same strange mechanical issue with the kill switch wiring. Another frantic change however wasn’t quick enough to keep them in the lead and instead they came out in 7th place, which they kept until the end of the race.

Whilst it was a gutting performance for two of the karts, our four novices in the karts 46 and 48 got plenty of track time and vastly improved their times and ability as the weekend went on.

The Team will now look forward to Round 5 at Rowrah Kart Track, Cumbria, with new switches for all the engines. If you are interested in joining us there or to get involved in the team, please contact karting@rnrmmsa.co.uk.