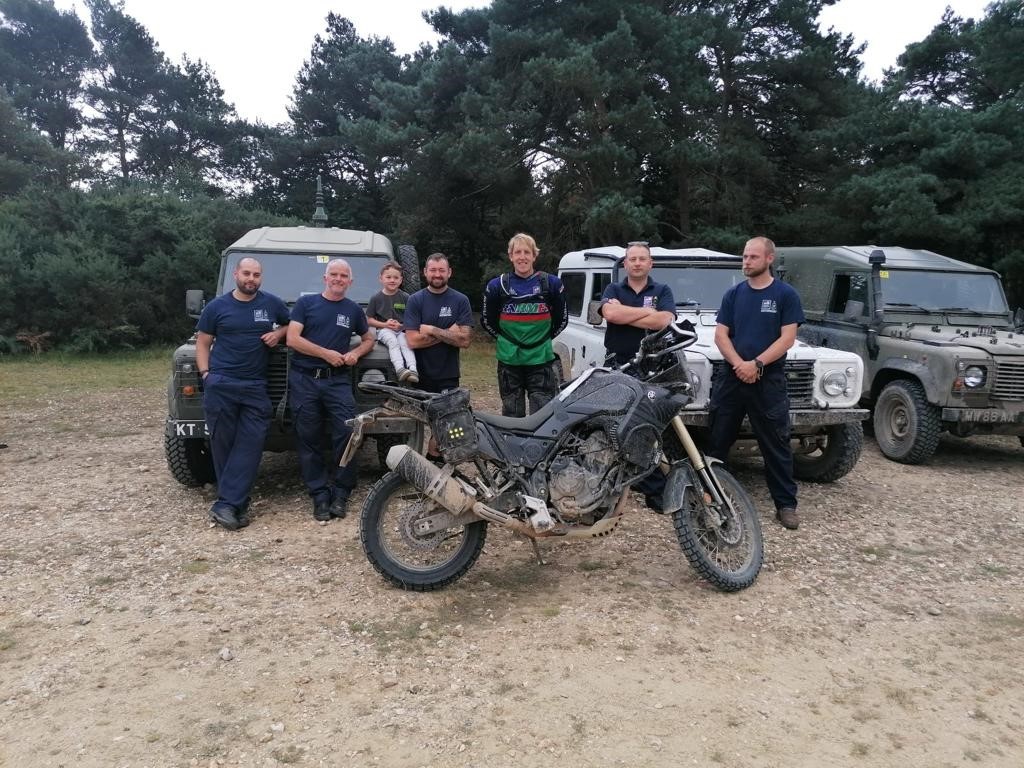 Re – organised from the start of 2021, Saxon Express under normal circumstances is at the beginning of the Season. With events finally getting back to normal across motorsport, the British Army Motorsport Association (BAMA) event was placed later in the calendar. This year also hosting Motorbikes across the event.

Teams began to assemble at the familiar surroundings of the Bovington Training Area with the weather promising to be a mostly dry day, with very little standing water around the course sections.

Two crews entered the 4×4 entry, with Fred Bassett and Pat Beckett in Truck 1 competing in a Green Fleet left hand drive vehicle and Alistair and Paul White competing in their own vehicle as Truck 15. Neither Paul nor Alistair had competed in four years due to deployments. Both trucks representing the Royal Navy Royal Marine Off Road Team (RNRMORT). Additionally, Chris Dello from the RNRM Enduro team joining the motorbikes to represent the RNRM Motorsport Association, with ORT Team Manager Rob ‘Squid’ Cozens undertaking a Marshalling role during the event.

The day was split into eight sections to be completed in a specified time limit. Beginning first Truck 1 began to undertake the competitive phases with the instructions passed through the door and the clock started. The route to begin with taking the teams into wooded sections around the edge of the training area acting as a navigation warm up, with Truck 15 and Chris not far behind.

The morning continued with all 3 teams progressing well and keeping themselves in the running towards the lunch halt. The initial phases covered Sequential, Jig Saw puzzles and Scatter sections, all designed to test the driving, navigation skills, and durability of the teams across multiple terrains.

With the crews having stopped for the mandatory halt, the next section began, detailed as Snooker. The aim, to navigate around the Training Area collecting the ‘Red Balls’, grid points at differing locations. Once collected these 6 figure grids enabled the teams to find a location and ‘pot’ a colour each with a point score associated.

With a tight time, and long transit periods between grid points, and the section utilising the Tank Training Area, the Snooker proved to be one of the most challenging sections of the day. With all the teams incurring penalties, the push for the final two sections began, first completing Orienteering followed by a Safari section to complete the day.

Both were carried out in the Off-Road Training Area to the north of the site. Providing more challenges for the crews. Truck 15 suffering mechanical failure nearly causing them to retire if not for the swift actions of the crew. Whilst the bikes encountered the soft sand making it difficult for them to progress.

After a good day of competing the crews returned to the harbour area, awaiting the scores with a hot drink in hand. Following the count, Truck 1 came in joint third overall and first green fleet vehicle and highest military, beating the Army crews present. Truck 15 completed the event in thirteenth place despite the mechanical failure adding to their efforts. The trophy of the day went to Squid, receiving best Marshall, as voted for by the competitors themselves.