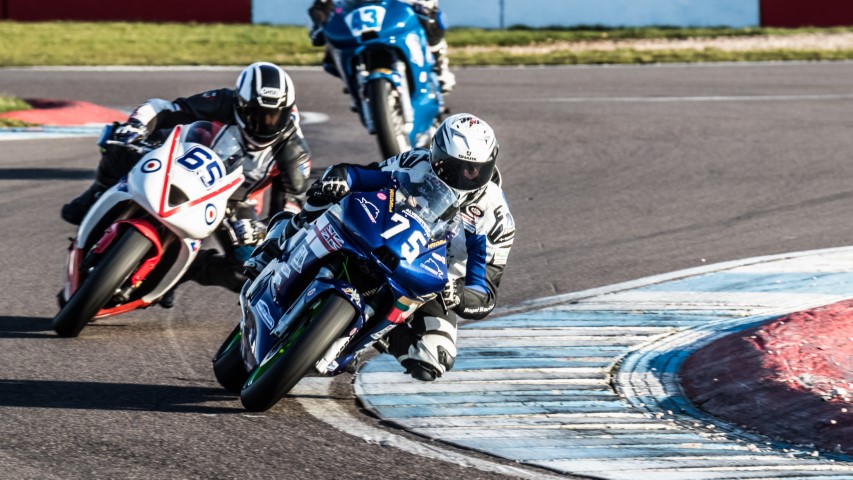 After a long winter off preparing the bikes, the team came together at Donington Park ready to start the uphill battle to take back the Inter Services trophy. This year has seen new riders along with established team riders back in the paddock, some choosing different machines giving the team a healthy mix of cb 500’s, 600’s both modern and Golden Era and a couple GP1 modern and Golden Era.

For some riders it had been several months since throwing their leg over a race bike so a full days testing was in order to bond with the bike again after making improvements over the winter period. Most of the team found their feet quickly and started to post some good lap times. One member of the team experienced difficulties which saw him being recovered twice in the van of shame. However as is usual with the team, the lads got around the bike and quickly found the issues and rectified them in time for the rider to get out and finish testing for the day.

With the great British weather adamant it was going to pull our awnings down with strong winds, it was mostly a wheel changing exercise for the mornings qualifying. With a wet track and a dry line forming the riders threw caution to the wind and pushed hard to gain positions on the grid for the military race and their own classes.

With the newest member of the team Sgt Luke Terry coupled with Mne Jonathan Atkinson and L/Cpl Charlie White (who changed to cb 500s this year), the stage was set for close battles in the cb 500 class. With elbows at the ready to fend off other riders, the lights went out and 40 bikes battling for position all charged together into Redgate corner. With elbows and knees touching other bikes as the riders leaned into the first corner and avoiding spilt second crashes in front of them, the competition for position was fierce. With a few missed gears, some hair raising braking moments, Charlie taking a tumble towards the end and Jonny trying his hand at off roading, our riders placed well amongst the more experienced riders.

The 600 cup race and After a difficult qualifying session our only team finding himself in this race was Lt Cemal Oram. Starting from 11thon the grid his good race starts managed to help him pick his way through and gain a 5thplace finish. After battling hard in the following race managed to snatch 3rdplace by 0.183 seconds, netting his first silverware of the weekend. To the following days race and after hard fought battles he again finished 3rd, missing out on 2ndplace by just 0.058 of a second! With silverware already under his belt, the scene was set for his last class race before the Inter Services race at the end of the day. Whilst fighting for his 3rdpodium finish of the weekend however, he came together with a rider he was lapping in the infamous Craner Curves. After getting spat off his bike he had to watched his bike carry on without him and impact the crash barrier. He knew he was not going to make the GB Racing Inter Services race, which was a bitter end to a successful weekend.

To the Golden era Super sports; riders LA (AH) Alan Curtis and Lt Cdr Max Wilmot found themselves in the mix with more riders this year as the class gains popularity. This only enhanced the on track rivalry between the two riders, picking up again from last year. Both riders placed well in qualifying towards the top ten. The first race saw Max power his way through into the top 5, however he managed to out brake himself and run wide into Redgate corner allowing Alan to snatch his place from him. After pushing hard to catch his rival, things became very unsettled with his bike and after a few close calls, losing the back end in and out of corners he had to retire from the race. Once back in the awning he found his rear wheel bearing had indeed collapsed. Alan fought with some faster riders and finished just outside of the top 10 having raced with a loose handle bar. After repairs by both riders the last race of the day was a close fought affair between the pair, finishing 12thand 13thwith less than half a second between them. The following days races saw the pair battling for position, with Max up to 4thuntil yet again he out braked himself at the end of Dunlop straight, allowing Al to catch him. However, so determined was Al to catch his rival that he over shot the run off curb of the old hairpin and decided to go off roading at over 100mph. Al managed to stay on his machine and rejoined the track to find himself in last position but mounted a strong comeback by making up 10 places in less than 5 laps, whilst also avoiding being lapped.

To the Pre National 600 with Cpl Dan Greenwood, Mne Callum Scott and CSgt Brian Fuidge. With all 3 riders qualifying well within the pack the first race was a close one. Bri being as smooth as ever was able to pick his way through the grid with ease and set some good lap times. Scotty was hot on his heels as they exited coppice bend only to be hit side on, hard, by another rider forcing him to crash into the gravel trap. Fortunately both rider and bike were ok, that’s racing. Dan spent the weekend concentrating on lowering his lap times and aiming for his last signature which would see him able to race without his newcomers bib. Dan put in a good consistent performance and built up his confidence. Scotty and Bri continued to battle all weekend setting some positive lap times and continuing to dual at every chance. Bri was also racing his Fireblade over the weekend in a very competitive class which saw him get to grips with the big bike and throw down some impressive lap times.

Onto the first GB Racing Inter Services race for 2018, the last race of the weekend. Qualifying had been better than expected for the team with Al claiming his first Pole position, Max starting on third and Bri, Scotty and Dan in the top ten. The lights went out and Max took advantage of his good start and was leading the pack into the first corner and managed to control the race for several laps. Dan, Scotty and a couple of Army riders charged at Al into the first corner forcing him to fight back and make up places; after the first lap the navy where 1stand 5th. Onto the 6thlap and as Al came barrelling down Craner Curves with two Army riders hot on his heels, he was able to look up to find himself closing down the lead pack just as Max (you guessed it) out broke himself again into the Old Hairpin and went flying across the gravel trap, somehow managing to remain on-board and getting applause from the marshals for not collecting the tyre wall. Unfortunately though his race was over. Whilst holding off the Army riders Al took a different approach to cornering by out braking himself and cornering between the gravel trap and the curb but somehow got away with it as bike and rider stayed together. This mistake allowed Bri, Scotty, Dan and the newest Army rider to catch him. With Scotty now in 5thand less than half a second behind Al in 4ththe pressure was on. Scotty was closing the gap on Al but in a bid to avoid hitting a back marker he left the door open for the Army’s newest rider to snatch 5thfrom him, Scotty finished in 6thplace which was a personal best. Bri was fast and smooth throughout but being held up by back markers and the Army managed a well deserved 7thplace. Al finished in 4th, with a gap of 0.101s to 5th.

Overall a fantastic weekend’s racing was had by all, with the RAF taking 1st, 2ndand 3rd in the Inter Services race. Navy riders gained experience, set PB’s and added some much needed points to the score board.